SATURDAY APRIL 30 - HUMBLE CERAMICS has donated 16 pieces which will be sold through http://www.tortoiselife.com/ (the coolest store in Venice/Abbot Kinney!!!!!) for REVIVE JAPAN (100% of the proceeds will be donated to Shigeru Ban (Architect), Iwate Prefecture, and other small charity groups that we (Tortoise) feel can help the people of Japan immediately.) If you live in Los Angeles, drop by, and shop for a good cause! Help us REBUILD JAPAN!
No comments: Links to this post 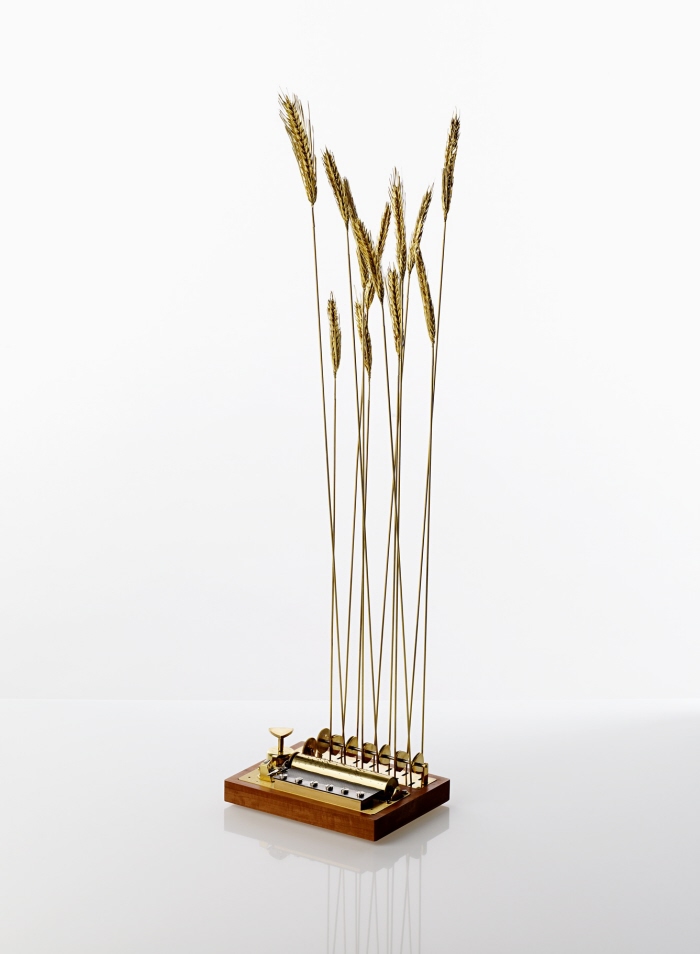 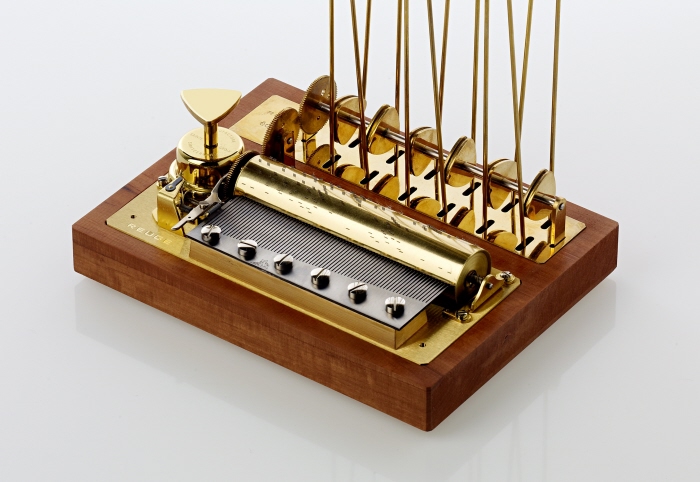 The music box SLIGHTLY WINDY uses this movement to animate the barley. It translates the lightness of nature being lulled by wind and music. Created by Jose Ferrufino of l'ECAL (Ecole Cantonal d'Art de Lausane) .. this is how the music box works: the motor gives movement to the cylinder, the pins on the cylinder hit the blades of the keyboard and it this action that creates the melody.
You can read more about here http://www.joseferrufino.com/index.php?/projects
/slightly-windy/ "Cambodian artist Sopheap Pich develops large-scale sculptures that draw on the history of his native country, daily life and own personal experiences and surroundings. His installation 'compound' is a construction using agricultural and craft materials found throughout Cambodia: bamboo, metal wire, plywood and rattan, developed as a response to the dramatic progress of urban development and its detrimental effects on the environment. The towering structure is situated within the foyer of the national museum of Singapore, on show as part of the 2011 Singapore Art Biennale, drawing attention to the idea that where there is rapid progress, there is also destruction. though the piece's stacked geometric structures suggest architecture, the interspersed tubular shapes suggest bombs or ammunition, and the threat of destruction. pich's multi-part sculpture responds to the emergence of high-rise architecture in Cambodia, using materials such as bamboo, sustained by the country's wetlands and lakes, that are now being drained for development. This cityscape is derived from traditional techniques used in craft and agriculture, but also reminds us of the computer software used in architecture and engineering offices. It took about 8 months to create the structure which consists of 83 individual units of various dimensions, in total measuring approximate 400 x 250 x 250cm." Inspired by Singaporean and Vietnamese cuisine, the Spice Table has opened in Little Tokyo, serving a focused menu of specialties such as catfish claypot and Hainanese chicken rice in an intimate dining room with high ceilings, exposed brick and bird cage chandeliers. (If you saw the space's former incarnation as Cuba Central, you might be wowed by the transformation.)

All wines -- from a charming list that spans an Edna Valley Albarino to Napa Cabernet, with an Erbaluce di Caluso and Becky Wasserman et Fils Pinot Noir in between -- are served both by the glass and bottle. Beers include Port Brewing Co.'s Wipeout IPA and West Coast Brewing's Le Merle Saison (beers are served in 4-, 12- and 16-ounce pours).

Chef-owner Bryant Ng, a former Mozza chef de cuisine, is settling into the kitchen, which features a wood-burning hearth for grilling satay and vegetables and otah (mackerel, spices and coconut milk formed into a paste then steamed and grilled in banana leaf). Laksa (spicy noodle soup) and kon loh mee (egg noodles with ground pork, shrimp and char siu roast pork) are among the noodle and rice dishes.

"Snacks" include sambal fried potatoes, headcheese with housemade pickles, and spicy chicken livers with toast. Ralph Waxman, also a Mozza veteran, might stop by your table to suggest the Leitz Rheingau Riesling with the curry fried chicken wings.

Desserts are palm sugar soft serve ice cream and kaffir lime custard. Why not get both?

This post written by Betty Hallock (from an LA Times article)

Nothing new, but here are just a few favorites by Anthony Gormley from the excellent Belgian Gallery Xavier/Hufkens
No comments: Links to this post 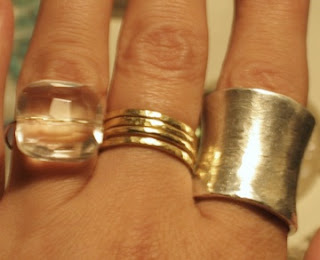 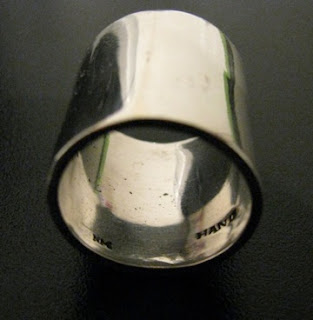 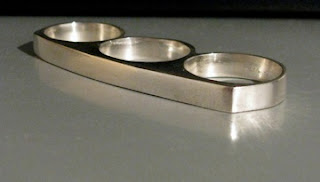 Loving the work of Los Angeles jewelry artist Noelle Miller whom I met at LA's very cool bar The Dime on Fairfax avenue ...
More info @
http://www.facebook.com/noellemillerjewelry
http://www.etsy.com/shop/noellemfinejewelry1
No comments: Links to this post

Art in the streets @ the Geffen Contemporary 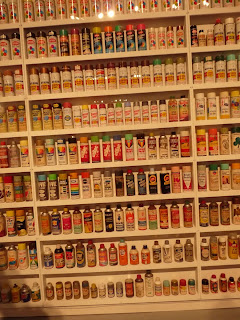 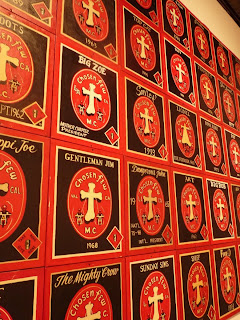 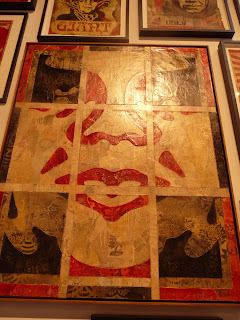 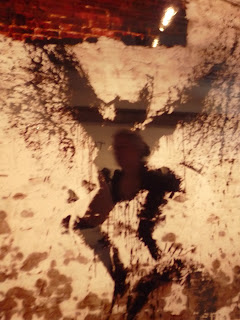 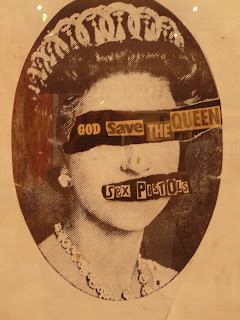 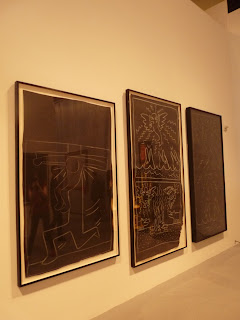 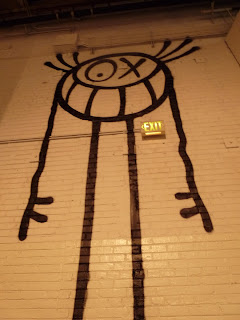 Photos by Maria Haworth
No comments: Links to this post

ASTROPHONICA in collaboration with UTILE present the video for Customtone by Fracture & Neptune, featuring Martin Fieber.

Created to celebrate the launch of the album 'Retrospect - a Decade of Fracture & Neptune', UTILE (Emilski and Nick Duggins) take us on a psychedelic journey into the Astrophonica universe.

Customtone features the lap steel talent of Martin Fieber and will be available as part of a limited edition 12" sampler for the the album. The sleeve art for this release will be hand printed and individually numbered by Emilski and willl be available at the end of May 2011

‘Retrospect – A Decade Of Fracture & Neptune’ is an 18 track, digital LP that brings together the classic, always cosmic, Fracture & Neptune sound from the year 2000 right up to the current date. Some released faves, some unreleased, some brand new and some unheard tracks from the vaults! All wonderfully remastered by Bob Macc and sounding better than ever. Release date end of May 2011.
Find out more about the album here - astrophonica.com/​retrospect-lp-a-decade-of-fracture-neptune/​

design and animation by Emilski & Nick Duggins for UTILE
contact@utilecreative.com
No comments: Links to this post

Loving these mobiles from LA ceramic artist Heather Levine. You can see the rest of her work @ http://www.heatherlevine.com/
No comments: Links to this post

Xylophone in the Forest by Invisible Designs Lab

We’re starting up production on our summer issue, and I’m on the hunt for amazing outdoor inspiration—events, locations, artwork, you name it. When I saw this xylophone project posted over at The Fox is Black, my jaw dropped. The video was made by the Japanese firm Invisible Designs Lab for DOCOMO to promote the Touch Wood SH-08C, a limited-edition phone with a solid wood body. The phone is cool, but the video? It’s incredible; a truly inspiring vision of what can be accomplished when creative minds work collectively to put a project into motion.

Set in a quiet forest, a long man-made structure gently slopes over the landscape, propped up by logs and containing hundreds of precisely placed wooden bars. I won’t say more and spoil the video for you, but I’ll just say I’ve never seen such a stirring rendition of a Bach Cantata, especially performed by a wooden ball. Enjoy!

Pssst … Do you have any amazing outdoor inspirations—a favorite hideaway, summer destination, or outdoor activity? Please let us know. We’d love to hear about them!

Company Overview - BUY A JAPANESE TEA BOWL FOR $20 and support the people of Japan. LA ceramic artists, and others around the country, are busy making Japanese tea bowls for our upcoming fundraiser.

SAVE THE DATE: Friday, May 6 at Peter Shire's Studio from 5pm - 10pm - Opening Night Party.

Description - Our friends Chi + Mari, and their friends in Japan, have found the three prefectures most affected by the earthquake + tsunami. We will wire the money raised in the fundraiser directly to these accounts:

BUY A TEA BOWL:
=> For just $20 each, own an original, hand-made Japanese tea bowl... each one made to support our friends in Japan. Sale dates to be announced when locations are finalized.

MAKE A TEA BOWL:
=> We are asking each ceramic artist to make and donate at least 10 Japanese tea bowls per requirements.

Mission - Deadline to complete the pieces, mail or drop off the donated items is Sunday, May 1, 2011.

More information here.
No comments: Links to this post

10 things I learned from Japan

1.
THE CALM
Not a single visual of chest-beating or wild grief.
Sorrow itself has been elevated.

2.
THE DIGNITY
Disciplined queues for water and groceries.
Not a rough word or a crude gesture.

3.
THE ABILITY
The incredible architects, for instance.
Buildings swayed but didn't fall.

4.
THE GRACE
People bought only what they needed for the present,
so everybody could get something.

5.
THE ORDER
No looting in shops.
No honking and no overtaking on the roads.
Just understanding.

6.
THE SACRIFICE
Fifty workers stayed back to pump sea water in the N-reactors.
How will they ever be repaid?

7.
THE TENDERNESS
Restaurants cut prices.
An unguarded ATM is left alone.
The strong cared for the weak.

8.
THE TRAINING
The old and the children, everyone knew exactly what to do.
And they did just that.

9.
THE MEDIA
They showed magnificent restraint in the bulletins.
No silly reporters.
Only calm reportage.

10.
THE CONSCIENCE
When the power went off in a store,
people put things back on the shelves and left quietly


I don't know the author of this post ... it was sent to me as an e-mail .... if this doesn't move you, I don't know what will. Please spread the word!
No comments: Links to this post

OTHER BLOGS by Delphine

Creativity and beauty are such essential nourishment for the soul. With so many of us out there "blogging", hopefully inspiring each other as well, I adore the fact that there are so many blogs to love, and how each of them is so different from the next and has such individual style!

So, in that spirit, I would like to thank all the bloggers out there, because this blog couldn't exist without yours!